In centre-led procurement models, the procurement team tends to focus on policies and strategic high-value and high-risk procurements, whilst the low-value sourcing is managed at an operational level. This makes sense as procurement teams are often small, and the transaction values are low (typically $5,000 - $200,000). However, whilst there are clear practicalities and efficiencies to this model, it also presents significant risks that need to be managed. The core problem is that operational procurement is often managed by email, and procurement teams have no visibility.

The VendorPanel SaaS application has been developed to give procurement team’s total transparency of sourcing that's happening across the organisation. In the case of corruption point of view, the risks of invisible operational sourcing are significant. From a process point of view, familiarity often reigns as the primary methodology, rather than good procurement principles. So, quote based procurement is often characterised by inconsistent process and weak competition, leading to both risk, poor value, and missed savings.

According to Founder, James Leathem, “Operational Sourcing has typically been ignored because it’s complicated; there are lots of buyers involved, lots of transactions, and the transaction values are modest. In Australian Government and Corporate organisations, this often represents 30-60 percent of all procurement spends. That’s a lot of spend that is not being managed effectively. The smart procurement teams are now recognising the scale of the risk, but also the size of opportunity. VendorPanel and its innovative design now make it simple for organisations to get control of this risk, and deliver significant value.”

VendorPanel is changing the paradigm of operational sourcing in corporate and government Australia. The cloud-based procurement tool has helped more than 700 Australian government and corporate organisations get significant transparency, better compliance and vast savings in operational procurement.

The VendorPanel’s back-story is familiar. The idea came from experience as a partner in a professional services firm managing vendor arrangements on behalf of corporate clients such as ANZ Bank, Fairfax Media, Macquarie and GE. James was frustrated by the lack of tools to support effective decentralised sourcing of services, and in the absence of finding a reasonable solution, he decided to build a platform himself. When the firm was sold, he completed his earn-out, quit his job, and invested everything to bootstrap VendorPanel. He and his team eventually launched VendorPanel in 2010. Since then, it has gained huge traction. Several years down the track this has been repeated across multiple verticals, with hundreds of government agencies, universities, utilities and corporations now using the platform.

The application’s innovative design combines the flexibility of the cloud with enterprise and government expectations of data security. This has enabled the company to overcome the challenges of collaborating complex relationships between suppliers and buyers. It also connects multiple government agencies and organizations together, and empowers them to work more efficiently. It also helps procurement functions deliver against other corporate objectives around supply diversity and social procurement.

The VendorPanel technology has been recognised in numerous awards, including Best Innovation in Procurement (CIPSA), Best Process in Procurement (CIPSA) and Best Government Technology (AIIA). The company’s performance has also been acknowledged with listings in the Deloitte Technology Fast 500 (Asia Pacific) and winner of the recent 2016 Entrepreneurial Supplier of the Year, PASA.

VendorPanel is now working towards expanding its ecosystem and supply diversity platform with new technologies and strategic partnerships. The company will be expanding its footprint to Canada and U.S. in 2017. “Our vision is to be the #1 procurement and marketplace platform for Government-to-Business (G2B) and Business-to-Business (B2B) sourcing,” concludes James. 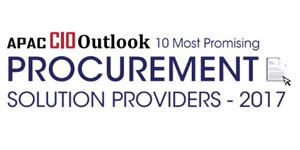